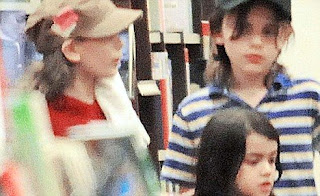 Why am I obsessed with Michael Jackson’s kids and what happens to them? Unlike many of my fellow teenagers of the ‘80s, I didn’t personally mourn Michael Jackson’s passing. He didn’t play a huge role in my pop culture life. I like some of his music and am awed by his dancing, but I don’t feel any great loss in my life now that he’s gone. As to whether he was a miscreant or just misunderstood, my opinion changes daily. So why do I find myself obsessed with what happens to his kids?

First, I actually cried when I first saw the news clip of Paris speaking at his memorial service. Since then I’ve been entranced by the beauty of his kids. And now I check several times a day to see if there’s new news about their future. Perhaps it’s just the unfathomably bizarre nature of their lives. Maybe it’s the completely incomprehensible role Deborah Rowe chose to play in the life of Michael Jackson and not in the lives of the children. Or maybe it’s that he willed guardianship to his very elderly mother or alternatively to Diana Ross despite having legions of siblings.
It’s all so strange and so foreign and so governed by extraordinary circumstances. It is all at once a soap opera, a circus, a theater show, and at the same time just three little kids’ lives, plain and simple. I feel slimy peering into their lives via TV, magazines and Web sites, and at the same time, I simply can’t stop.

Get in Touch With Bright Horizons Today!